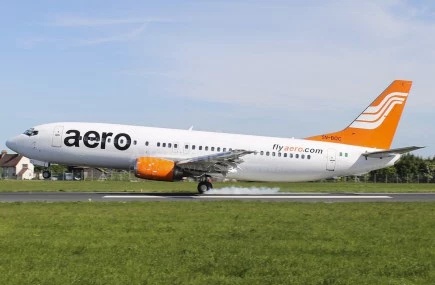 Aero Contractors Airlines on Wednesday said that it would suspend all its scheduled services indefinitely from Thursday September 1.

The airline’s Chief Executive Officer, Mr Fola Akinkuotu, said in a statement in Lagos that the management decision was part of the strategic business realignment to reposition the airline and return it to the path of profitability.

He said that all staff directly and indirectly involved in providing the services, would also proceed on indefinite leave of absence.

“This business decision is as a result of the current economic situation in the country, which has forced some other airlines to suspend operation or outrightly pull out of Nigeria.

“In the case of Aero, the airline has faced grave challenges in the past six months, which impacted its business and by extension the scheduled services operations,” he said.

Akinkuotu said the impact of the external environment had been very harsh on the airline’s operational performance, hence the management’s decision to suspend scheduled services operations indefinitely effective September 1, 2016.

“This suspension is pending when the external opportunities and a robust sustainable and viable plan is in place for Aero Contractors to recommence its scheduled services.

“The implication of the suspension of scheduled services operations extends to all staff directly and indirectly involved in providing services, as they are effectively to proceed on indefinite leave of absence during the period of non-services.

“We are aware of the impact this will have on our staff and our highly esteemed customers, hence we have initiated moves to ensure that we are able to return back to operations within the shortest possible time, offering reliable, safe and secure operations,” he said.

Akinkuotu said that both internal and external environmental factors had made it difficult for the airline to continue its scheduled services, leading to the management’s decision.

He recalled that, as part of its resolve to ensure the airline survived, unlike most other carriers that experienced short life span in the country, Asset Management Company of Nigeria (AMCON) had appointed Mr Adeniyi Adegbomire as Receiver Manager in February 6, 2016.

Akinkuotu also noted that since AMCON’s intervention in Aero Contractors in 2011, it had provided support for the airline to meet working capital requirements and fleet expansion.

The ticket counters at the Murtala Muhammed Airport Terminal (MMA2) were empty, as of August 31.