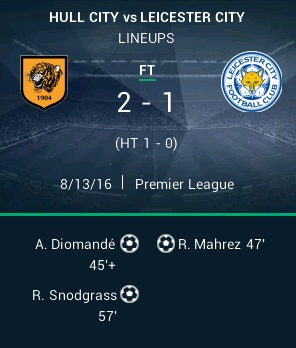 However, it was manager-less Hull, despite having made no signings this summer following their promotion from the Championship, who edged to victory in the first game of the season.

Not even a penalty incorrectly awarded to Leicester could save them.

N’Golo Kante may be the only key player Ranieri has seen depart the King Power Stadium after last season’s heroics, but his absence was much more obvious than the match-winning abilities of Mahrez and Vardy.

Leicester may have been more creative than their hosts, but they were nowhere near as tidy in possession as fans have come to expect, their build up was not as intelligent and direct – all aspects of their game they could rely on the now-Chelsea player to lay the foundations.

That, however, was not the only reason they left the KC Stadium without so much as a point. The side with a defensive record bettered by only two teams last season were rather terrible at the back.

Leicester failed to deal with a cross, as Kasper Schmeichel punched it into the path of Abel Hernandez, who sent it looping over him with a delightfully acrobatic kick.

Before that corner, Hull had failed to register a shot on target, while Christian Fuchs’ low shot just five minutes earlier had been Leicester’s only one, though Vardy and Mahrez had both passed up big opportunities around that.

The champions were expected to bounce back when Mike Dean offered a penalty early in the second half, despite Demarai Gray being fouled outside the box.

While Mahrez coolly converted the penalty, Leicester’s good work was undone just 10 minutes afterwards when Schmeichel recklessly threw away possession and, with his defence caught out of position, the goalkeeper was caught out as it fell to an unmarked Robert Snodgrass, whose fine finish struck the back of the net. 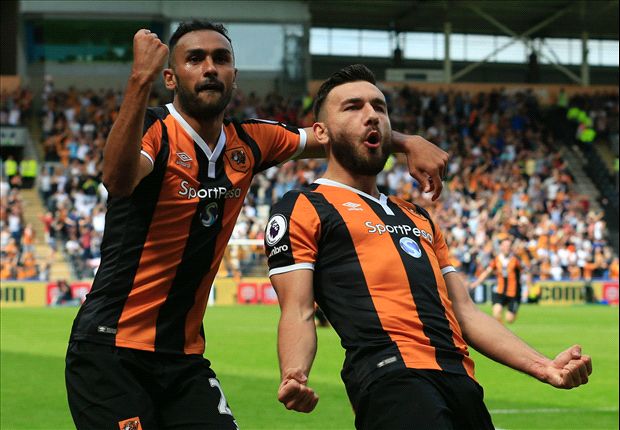 With no one marking him or even occupying the space on the edge of the box, the Scotsman had all the time he needed to pick his spot as he knocked it home. Wes Morgan should have been quicker to close him down, but it was another unnecessary goal to give away – one which summed up the fragility of a back line missing the protection provided by a midfielder with excellent reading of the game.

Leicester enjoyed the majority of possession from there on in, but failed to threaten a side widely seen as the weakest in the division.

Swiping at balls, smashing high over the bar and caught behind the pace on occasion, Vardy had a dire game up front, having just two shots in the 90 minutes. Mahrez, meanwhile, had more initiative and urgency about him, but was also unable to rescue his side.

It was a game which looked very much like the first of the season for Leicester. They seemed lethargic and not at their electrifying best. Vardy and Mahrez will get sharper as the weeks go on, but after having a key part of every aspect of their game ripped out in Kante’s sale to Chelsea, Ranieri has some tinkering to do if his side are to inspire again this season.

Hull City made history in the 2-1 victory as they became the first newly-promoted outfit to defeat the Premier League winners on the opening day of the season.

Leicester are also the first reigning top-flight champions to lose their opening game of the following league season since Arsenal in the 1989-90 season, when the Gunners were crushed 4-1 by Manchester United.

Saturday’s clash at KCOM Stadium was the eighth occasion that a newly-promoted side had played the reigning champions on the opening matchday of a Premier League season.

Nevertheless, Hull hold the recognition of being the first promoted side that won.