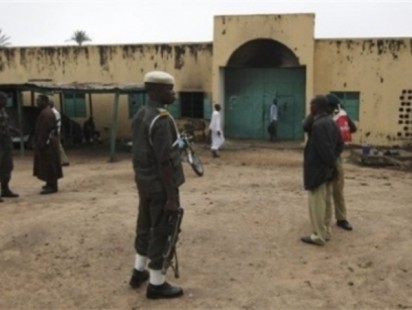 No fewer than 15 prison inmates serving different jail terms allegedly escaped, on Tuesday night, from Nsukka Prisons, in Enugu State scaling through the perimeter fence of the prison under the cover of darkness.

A reliable source at Nsukka prisons who pleaded anonymity said that the inmates tactfully opened the cell without the knowledge of the warders on night duty and scaled through the perimeter fence of the prison.

It was gathered that before the warders on night duty could patrol round the prison yard and check the cells, no fewer than 15 inmates were already gone.

Nsukka prisons was meant to contain 180 inmates but it allegedly housed about 500 inmates squeezed in compact cells of the prison yard.

When contacted on his mobile phone, the officer in charge of Nsukka prisons, Mr Okonkwo Lawrence Okonkwo confirmed the jail break but declined to give details and the number of inmates that escaped.

“The state Controller, Mr Amariri would brief the press and the public on the number of inmates that escaped and the efforts to re-arrest the escapees in the not too distant time.”

However unconfirmed reports said that two of the escapees were re-arrested.

Nsukka prisons officials were sighted on Wednesday in various parts of Nsukka town and its environs in an effort to get information over fleeing inmates.