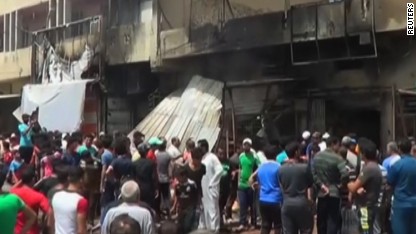 Three Iraqi officers were killed and 10 others wounded early Thursday when two suicide bombers blew themselves up at a police station in western Baghdad, authorities said.

The Sunni terror group ISIS claimed responsibility for the attack in a statement, saying that 20 police officers had died.

The two suicide bombers and a third armed man went to launch their attack, but security forces were able to kill the armed man. However, the other two detonated their vests, causing multiple casualties.

This latest attack comes after one of the bloodiest days in the Iraqi capital this year when more than 90 people were killed in three separate bombings targeting Shiites that were claimed by ISIS.

In Wednesday’s violence, 64 people were killed when a car bomb went off at a Baghdad market, Iraqi police said. An additional 87 people were wounded in the attack in the largely Shiite neighborhood of Sadr City.

Political risk analyst Kirk Sowell said the jihadist group’s tactics are changing as it loses grip on territory in Iraq.

“ISIS has receded somewhat militarily; they don’t have a … standing army to hold territory,” Sowell said. “But what they’re good at unfortunately is these terrorist attacks against soft targets.

“(Wednesday) was worse than most, but in the last few months there’s been this increased focus on terrorist attacks going back to pre-2014 tactics.”