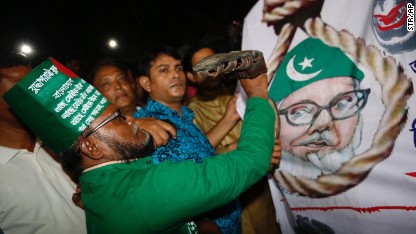 The kingpin of notorious al-Badr force and second top collaborator of the Pakistani occupation forces after Jamaat guru Ghulam Azam, Motiur Rahman Nizami, was executed at Dhaka Central Jail in the early hours of today.

The execution took place at 12:10am, DMP Commissioner Asaduzzaman Mia told the Dhaka Tribune at 12:30am.

Nizami, the 75-year-old incumbent chief of Jamaat-e-Islami, did not seek presidential clemency admitting the crimes. The three other senior Jamaat leaders hanged for their war-time crimes also did not seek clemency.

The International Crimes Tribunal sentenced Nizami to death for planning, instigating and executing genocide, murder, rape and deportation among other crimes in Pabna and Dhaka during the 1971 Liberation War.

Of the three counts that brought Nizami the death sentence, two were committed at Pabna’s Santhia.

Nizami was found guilty of planning and executing the killing of 450 people, rape of 30-40 women and deporting of Baousgari, Ruposhi and Demra villagers on May 14, 1971. He had also ordered the murder of 30 people of Dhulaura village on November 27, 197.

The other offence is conspiring and instigating the abduction, torture and mass killing of intellectuals and professionals in Dhaka and elsewhere at the fag end of the war.

He was sentenced to death on January 31, 2014 in connection with the sensational haul of 10-truck arms at the CUFL jetty in 2004.
Nizami was the industries minister at that time.

Until September 30, 1971, Nizami was the chief of Jamaat’s student wing East Pakistan Islami Chhatra Sangha (now Islami Chhatra Shibir).
Apart from aiding the Pakistani Army in person, he had formed ruthless militia al-Badr Bahini with the members of Chhatra Sangha which mounted Gestapo like attacks under his command.

Nizami and his party also misused Islam during the war. Nizami violated the Quranic injunctions and prophetic traditions by forming al-Badr force, and encouraging its members to exterminate and kill Bangali intellectuals and pro-liberation people, the International Crimes Tribunal said in its verdict.

A top leader of the collaborators, Nizami visited different parts of the country during the war and in his speech he abused Islam by saying “Pakistan is the house of Allah,” “Hindus are always enemies of Muslims” and “Islam and Pakistan are one and indivisible.”

Before Nizami, the tribunal sentenced to death al-Badr leaders Ali Ahsan Mohammad Mujahid, Chowdhury Mueen-Uddin and Ashrafuzzaman Khan for the killing of intellectuals. Of them, former minister Mujahid was executed on November 21 last year while the two others have remained absconding.

Former Jamaat chief Ghulam Azam was given imprisonment until death on July 15, 2013 considering his age though he was found guilty of conspiracy, incitement, planning, abetment and failure to prevent murder. He died in jail.

Both of them had fled the country after the independence and returned in 1978. They resumed politics and were never brought to book for the war-time offences until the formation of the tribunal in 2010.

Nizami was arrested on June 29, 2010 and soon shown arrested in the war crimes case. He was indicted on May 28, 2012.
Even though the trial ended on November 13, 2013, the case was reheard due to shuffle in the tribunal.

The tribunal sentenced him to death on October 29, 2014 and the Appellate Division upheld the death penalty on January 6 this year. His review petition was rejected on May 5.

Jamaat enforced shutdown across the country on May 8 in protest against the rejection of Nizami’s petition.

After his execution, Nizami’s body was taken by the law enforcers to his birthplace at Monmothpur of Santhia in Pabna for burial.
On the way to Pabna, the district police units were kept ready to escort the ambulance carrying the body.

Locals started preparing the grave yesterday morning sensing that he could be hanged immediately.

The law enforcers also took safety measures for the eight prosecution witnesses from Santhia who had testified against the war criminal at the tribunal.

Superintendent of Police Alamgir Kabir said that they were ready to thwart any untoward incident in the district.

After the announcement of execution, justice seekers and war crimes trial campaigners who had been eagerly waiting for Nizami’s execution at Dhaka’s Shahbagh and the jail gate celebrated the moment.

Since Monday when the top court released full verdict of the review petition, everybody was waiting for an official announcement or a hint about the time when top war criminal would be hanged.

The possibility rose yesterday when the movement of media persons and jail officials became visible as hangman Tanvir Hasan Raju was brought to the Dhaka Central Jail from the Kashimpur high security jail at 3pm.

Raju was earlier part of all the four teams of hangmen who had executed the death sentences of the four convicted war criminals since December 2013.

Previously it was hangman Shahjahan who played the key role during the executions. Raju worked as one of his associates. Jail sources said that Raju had been given the charge since Shahjahan was ill.

After an hour, the law enforcers started taking security measures in and around the jail, and at 6pm all the streets adjacent to the area were closed.

Around 6:30pm, Nizami’s family members called Jail Superintendent Jahangir Kabir and asked for permission to meet the death-row convict. “The family asked the jail superintendent whether it was their final meeting. He said ‘no, no. Just come,’” Nizami’s lawyer Tanim told the Dhaka Tribune.

One of the family members, who could not be identified immediately, said that Nizami had been saying his prayers when they entered the jail. “He said that he was fine and asked us and party supporters to have patience,” she told reporters outside the jail around 9:30pm.

Around 8pm, Home Minister Asaduzzaman Khan Kamal told the Dhaka Tribune that the government had already given node to execute the war criminal’s death sentence. He later confirmed that Nizami had not sought presidential clemency – his last resort to save the neck.

Jail sources said that Nizami had conveyed his opinion about the clemency to the magistrates earlier in the day.

Senior government officials started entering the jail around 9:30pm while the main gate was shut at 10:30pm giving a clear impression that Nizami could be executed any time.

Nizami was brought to the Dhaka Central Jail from Kashimpur on Sunday, three days after the Appellate Division of the Supreme Court rejected his review petition – the last legal battle to prove himself innocent.

The full verdict was published on Monday and it was read out to the condemned war criminal in the night.

According to Human Rights Watch, the court limited the number of witnesses Nizami could call to defend himself and ultimately was only allowed four witnesses to testify on his behalf.

He was not allowed to challenge prosecution witnesses who allegedly had offered inconsistent testimony, they said.

In addition, HRW said the presiding judge, the prosecution, and an external consultant, unlawfully discussed his trial publicly.

“Human Rights Watch opposes the death penalty in all circumstances as an irreversible, degrading, and cruel punishment,” said Brad Adams, HRW Asia director. “It is particularly problematic when there are questions about whether proceedings meet fair trial standards.”

“While many in Bangladesh believe Nizami to be guilty and want him punished, justice is only served through fair trials,” said Adams. “Instead of expedited hangings, authorities in Bangladesh should do everything possible to ensure that victims receive accurate answers about responsibility for crimes of such gravity and magnitude.”