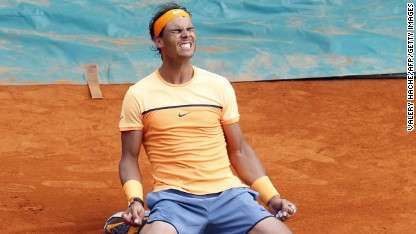 The 29-year-old Spaniard, who had a tough three-set battle with Andy Murray in the semifinals, took control of the decider as Monfils wilted, failing to win a further game.

“It’s great to win a Masters title again,” Nadal said after his victory.

“I had a tough season last year, but I’ve had better preparation this year, even with a tough start to the season,” he added.

Nadal is running into form ahead of next month’s second grand slam of the season on the clay of Roland Garros, having struggled earlier in the year, losing in the opening round of the Australian Open.

World number one Novak Djokovic was the previous custodian of the title, but his defense of the Monte Carlo Open crown ended early as he was stunned in the second round by Czech Jiri Vesely.

That left the way clear for Nadal to claim his 28th Masters 1000 crown, drawing level on the all-time list with Djokovic, and 68th title overall, although he had to come from a set down to beat Murray in the last four.

Monfils beat fellow Frenchman Jo-Wilfried Tsonga, who conquered Roger Federer in the quarterfinals, in his semifinal match, but had a poor 2-11 record against Nadal going into the title match.

He bravely hit back from a break down twice in the opener before Nadal broke for a third time to take it after over an hour of intense action.

Monfils mustered the energy to break for 3-1 in the second set, only for Nadal to retrieve the advantage.

In the 11th game, Monfils converted the fourth break point on his opponent’s serve and then bravely served it out to level.

That was to be the last game he won as Nadal showed the ruthless intensity of earlier years to take the next six, sealing match point with a blistering forehand.

It was his 48th clay-court crown, one behind the record 49 of Argentina’s Guillermo Vilas, and his first Masters crown since Madrid in 2014.

“I hope this week helps me a lot,” Nadal said as he heads to Barcelona this week with the chance to equal that landmark.