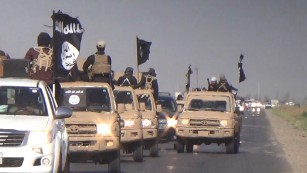 At least 200 people are reported missing after an attack by the Islamic State (ISIS) on a cement factory near Damascus.

Workers were reportedly taken from a dormitory where they were staying on the outskirts of the town of Dumeir.

A factory administrator said no-one had been able to contact the workers since the assault on Monday.

The area around Dumeir has seen fierce fighting between government forces and ISIS militants in recent days.

The workers were employed at the Badiyah factory, just outside Dumeir, about 25 miles (40km) east of the capital.

Syrian state television, quoting an unnamed industry ministry source, said 300 workers and contractors had been kidnapped from the factory by ISIS militants.

The factory administrator had earlier put the number seized at 250, but rebel sources said it did not exceed 200.

There was also confusion over who attacked the factory, with some sources suggesting it was a rebel group called Jaysh Tahrir al-Sham.

A local resident told AFP news agency: “We haven’t been able to reach our family members since noon on Monday after an attack by Daesh [ISIS] on the factory.

“We have no information about where they are,” the resident added.

Efforts are under way to secure the workers’ release, with indirect contacts said to have been made.

Meanwhile, in the north of the country, Syrian rebels have reportedly seized control of ISIS’ main supply route to Turkey
.
The Syrian Observatory for Human Rights said “rebel factions and Islamists” had taken over the town of al-Rai, which is on the border between Syrian and Turkey.

A Syrian military source told Reuters there had been attacks but all of the militants who took part in them had been killed.

The mass abduction comes almost two weeks after Syrian and allied forces recaptured the ancient city of Palmyra from ISIS fighters, in what was seen as a significant loss to the militant group, which had held the city since last May.