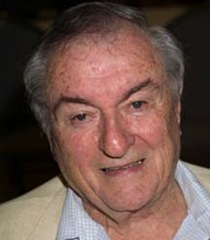 Jason Wingreen, best known as the voice of Boba Fett in ‘Empire Strikes Back’ and the Bartender on ‘All in the Family’, passed away in his Los Angeles home on Christmas Day.
He was aged 95.

Jason Wingreen was a prominent fixture on television from 1955 until he retired in the mid-1990s. Along with voicing Boba Fett, the actor gained worldwide notoriety on the hit 70s sitcom All in the Family, playing Harry the bartender. The role also carried over into the spinoff sitcom Archie Bunker’s Place. Jason has over 200 TV credits to his name.
Jason’s son Ned confirmed the news of his father’s passing last week.

A native of Brooklyn, Jason Wingreen appeared in three separate episodes of The Twilight Zone , the most notorious being the 1960 installment A Stop at Willoughby , where he played the train conductor. He went onto play a Chicago police captain in the original 1959 series The Untouchables . And he was one of the key characters on 12 O’Clock High.
He also appeared as Judge Arthur Beaumont on Matlock in the 80s. Other memorable turns include 6 episodes apiece of The Fugitive, The F.B.I. and Ironside , where he played a total of 18 different characters. And Star Trek fans will remember his iconic death as Dr. Linke in the 1968 episode The Empath .
On the movie side, he has a memorable role in the 1980 classic comedy Airplane!
But it was All in the Family that gave him a full-time job and allowed him to retire. He appeared in over 117 episodes across 7 seasons, keeping the working actor employed from 1976 until 1983.

About the gig, he had this to say back in 2010 to The Cliassis TV History Blog.
“ “[It] allowed me to retire, let me put it that way. I loved it. It was wonderful. We worked from Tuesday on to the rest of the week. Monday, you had [off], to go to the bank and the laundry. We’d arrive on Tuesday morning, we’d sit around, read the script. We’d start laughing in the morning and laugh until 5 o’clock, when we’d quit. I mean, how could you not like it?”

In 1979, Jason Wingreen originally auditioned for the role of Yoda in Star Wars: Episode V – The Empire Strikes Back , but that role went to Yoda puppeteer Frank Oz . As a consolation prize, he was given four lines of dialogue as the masked bounty hunter Boba Fett, who captures Han Solo and brings him to Jabba the Hutt. About the Boba Fett role, he had this to say before his passing.
‘ “I think the actual work, aside from the hellos and goodbyes and all that, could have been no more than 10 minutes.”

Jason Wingreen went uncredited as the voice of Boba Fett, with 70-year-old Jeremy Bulloch taking on the costumed part of the role. It never became publicly known that the Boba Fett voice was his until 2000. The actor claimed that he never received any residuals for the performance, despite his voice also being used for some action figures.
Other movies that feature Jason Wingreen include his debut in the 1959 Western The Bravados , A Guide for the Married Man in 1967, Marlowe in 1969, They Only Kill Their Masters in 1972, The Terminal Man in 1974 and Oh, God! You Devil in 1984. He retired shortly after appearing on both Seinfeld and In the Heat of the Night in the mid-90s, the later of which reunited him with Carroll O’Connor .

The actor is survived by his son, two grandchildren, and his sister Harriet Wingreen, who spent decades as an orchestra pianist for the New York Philharmonic.

One thought on “‘Star Wars’ actor, Jason Wingreen, dies at 95”