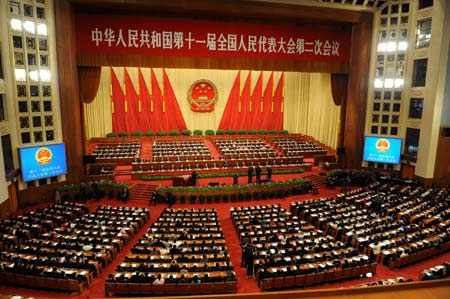 An Weixing, an official with the public security ministry, told journalists on Sunday that terror attacks were a rising issue in China.

However, some analysts feel that the purpose of the bill is aimed at control of the Chinese population, rather than curbing domestic and international terrorism.

“In my opinion they’re using the pretext of what is occurring globally as efforts to increase their control over the domestic population,” James Leibold, senior lecturer in Chinese politics at Australia’s La Trobe University, said.

A draft of the law concerned foreign governments — including the Obama administration — the business sector, particularly tech companies, and human rights organizations, which say it uses a too-broad definition of terror, allowing Chinese authorities increased powers of surveillance.

The term, according to Xinhua, is “defined as any proposition or activity — that, by means of violence, sabotage or threat, generates social panic, undermines public security, infringes on personal and property rights, and menaces government organs and international organizations — with the aim to realize certain political and ideological purposes.”

Leibold said China was using terrorism legislation to target some of the country’s ethnic minorities.

“One of the big concerns I have with this draft counter-terrorism bill is that the definition of terrorism is quite vague and open-ended and if we look at how Chinese officials and the media have used the terrorism tag in the past, it’s chiefly applied to the Uyghurs as well as the Tibetans,” Leibold said.
“It’s applied to people who disagree with policies of the Chinese Communist Party.”

The bill, to take effect in January, will require telecommunications companies and Internet service providers to provide technical support and assistance “including decryption,” to authorities, the so-called “back door” that had worried many in government and the tech industry.

The government says that increased online activity by terrorists justifies the new requirements.

The law will also see the creation of a national intelligence center dedicated to counter-terrorism.

Several critics, including a French journalist, Ursula Gauthier, who was expelled from China this week, have questioned China’s policies in the ethnically divided province of Xinjiang, which is home to the mainly Muslim Uyghurs.

China has blamed Uyghur separatists for a series of deadly attacks, and it claims they are no different from ISIS or al Qaeda terrorists.
But exile groups and human rights activists say repressive religious policies and economic marginalization are provoking the unrest.