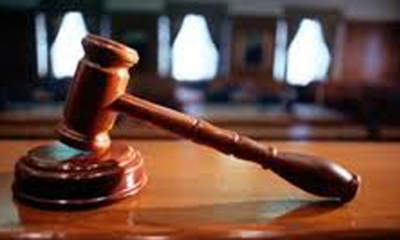 A South African king is set to go to jail after the country’s highest court threw out his bid to overturn a 12-year prison sentence.

King Buyelekhaya Dalindyebo was convicted of kidnapping, assault and arson.
He has been ordered to report to police within 48 hours or risk arrest, anonymous source reported.

He is the first monarch to be given a jail term since South Africa became a democratic state  in 1994.

The case was related to a dispute King Dalindyebo had with some of his subjects more than two decades ago.

He was accused of kidnapping a woman and her six children, setting their home on fire and beating up four youths, one of whom died, because one of their relatives had failed to present himself before the kings’s traditional court.

The Constitutional Court refused to hear the case, meaning that he has run out of legal options and the
ruling of the Supreme Court of Appeal stands.

“His behaviour was all the more deplorable because the victims of his reign of terror were the vulnerable rural poor, who were dependent upon him. Our constitution does not countenance such behaviour,” the Supreme Court of Appeal said in a judgement in October.

“We are a constitutional democracy in which everyone is accountable and where the most vulnerable are entitled to protection,” it added.

Many people feel King Dalindyebo has disgraced the royal family, and he will be hard-pressed to find any sympathy.
There are already rumours of his son Prince Azenethi Dalindyebo being crowned as the next monarch.

Royal family spokesman Daludumo Mtirara said the decision of the Constitutional Court marked the end of the king’s legal battles, and he had “failed to
clear his name in our courts”, the privately owned eNCA news site reports.