A U.S. air strike has destroyed more than 238 fuel trucks controlled by Islamic State — ISIS — militants in north-east Syria, the US military has said.

It is thought the pilots found the trucks parked up together, waiting to be loaded at an oil production
point near al-Hasakah and Dayr Az Zawr.

Warning shots were reportedly fired to scare away the civilian drivers, before the destruction of the trucks began. 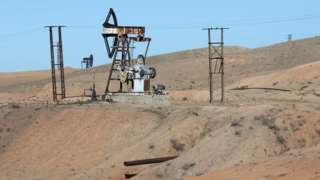 ISIS makes large amounts of money from oil it produces from seized facilities.

The U.S. Department of Defense says it will release video of the air raid, which took place over the
weekend.

Last week another 116 tankers were destroyed in a previous air strike.

“This was conducted in many ways identical to our last,” Pentagon spokesman, Capt Jeff Davis, said on Monday.

“It was proceeded with a leaflet drop to warn drivers out of their trucks as well as a show of
force”.

Mr Davis said there were no reports of civilian casualties.

The oil lorry strikes are part of Operation Tidal Wave II, a change in tactics on the part of the coalition.
Previously, petrol supplies were largely avoided because of the impact on civilian populations.

A U.S. led coalition began a campaign of air strikes in Syria and Iraq in 2014, after IS took large parts of both countries.

A series of terror attacks in Paris 10 days ago for which ISIS claimed responsibility have intensified the
air campaign in recent days.