Eighty people were reported killed after gunmen burst into the Bataclan concert hall and took
dozens hostage.
The siege ended when security forces stormed the building.

People were shot dead at bars and restaurants at five other sites in Paris.
Eight attackers are reported to have been killed.

Police believed all of the gunmen were dead but it was unclear if any accomplices were still on the
run after the string of near-simultaneous attacks.

Paris residents have been asked to stay indoors and about 1,500 military personnel are being
deployed across the city.

The gunmen’s motives were not immediately confirmed, but one witness at the Bataclan heard
one of the attackers appear to express support for the militant Islamic State (IS) group.

“It’s Hollande’s fault, he shouldn’t have intervened in Syria!” the man shouted, according to French
news agency AFP, citing the French president’s decision to take part in Western air strikes on IS. 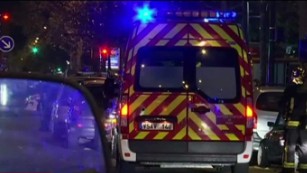 The attack on the 1,500-seat Bataclan hall was by far the deadliest of Friday night’s attacks. Gunmen opened fire on concert-goers watching US rock group Eagles of Death Metal. The event had been sold out.

The series of attacks not far from the Place de la Republique and the Place de la Bastille struck at the
heart of the capital when cafes, bars and restaurants were at their busiest.
Customers were singled out at venues including a pizza restaurant and a Cambodian restaurant.

The other target was the Stade de France, on the northern fringe of Paris, where President Hollande
and 80,000 other spectators were watching a friendly international between France and Germany,
with a TV audience of millions more.
The president was whisked to safety after the first of three explosions just outside the venue to convene an emergency cabinet meeting. Three attackers were reportedly killed there.

As the extent of the bloodshed became clear, Mr Hollande went on national TV to announce a state of
emergency for the first time in France since 2005.

The decree enables the authorities to close public places and impose curfews and restrictions on the
movement of traffic and people.

Within an hour, security forces had stormed the concert hall and all four attackers there were dead.
Three had blown themselves up and a fourth was shot dead by police.
Another attacker was killed in a street in eastern Paris, reports said.

Speaking after arriving at the concert hall, President Hollande said the attackers would be fought
“without mercy”.

US President Barack Obama spoke of “an outrageous attempt to terrorise innocent civilians”.

UK PM David Cameron said he was shocked and pledged to do “whatever we can to help”.

France has declared a national state of emergency and tightened borders after the gun and bomb attacks in Paris.

Paris Mayor Ann Hidalgo announced that all schools, museums, libraries, gyms, swimming pools and markets would be shut on Saturday.