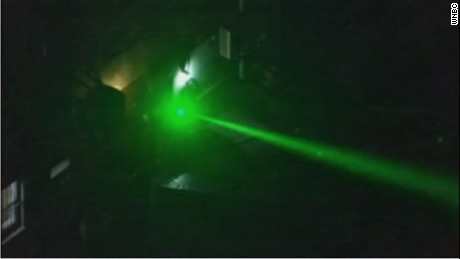 More than 20 aircraft were struck by lasers from the ground on Wednesday night, according to the
Federal Aviation Administration.

Strikes were reported in 10 states as well as in Puerto Rico and Ontario, Canada, said the FAA.

Aircraft flying over major cities such as New York, Los Angeles and Dallas were among those affected.

While no pilots reported injuries, pointing a laser at an aircraft is a federal crime, signed into law in
2012.

“Lasers distract pilots from their safety duties and can lead to temporary blindness during critical
phases of flight, such as takeoff and landing. In some cases in the past, pilots have reported eye
injuries that required medical treatment,” the FAA said.

As handheld lasers are becoming more common, such incidents of laser-pointing have been on the
rise.
As of October 16, the total number of laser strikes in the United States this year was 5,352, said the FAA. Last year, there were 3,894, and in
2005, there were only 283.

The helicopter of WABC was one of the aircraft hit by a laser earlier this week. Video from the news agency shows a conspicuous green laser
glaring at the chopper.

One thought on “Lasers strike more than 20 aircrafts”