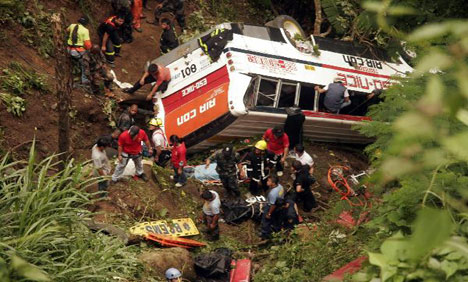 An overcrowded bus skidded off a road on Tuesday in Nepal and plunged down a hill, killing at
least 30 people and injuring 35 more, a police officer said.

People were riding on the roof of the packed bus when it tilted over on a gravel road, said Shiva Ram Gelal, chief district officer in Nepal’s Rasuwa district.
The vehicle then slid about 650 feet (200 meters) down a hill.

Nepalese military troops, police officers and locals carried out a rescue operation after the crash in
Ramche, a village in Rasuwa about 20 miles (32 kilometers) north of Kathmandu, according to Gelal.

A fuel shortage in Nepal has hit public transportation hard, leading to fewer vehicles in service.
As a result, those that are running are more likely to carry more riders than they should, the police officer said.

The mountainous Asian nation, a place with plenty of narrow, windy roads that give way to cliffs, has
seen many deadly bus crashes like this one, some of them involving vehicles teeming with people.

In January 2013, at least 30 people died after a bus hit a pole on the side of a road in Doti district and
plummeted nearly 700 feet, police spokesman Ramesh Bahadur Dhanuk said then.
A month earlier,
15 died in another crash in Nepal’s Surkhet district.

A driver apparently lost control around a “hairpin bend” in western Nepal’s remote mountains in
September 2012, sending his bus off a cliff and killing at least 29 people, according to police inspector Barun Bahadur Singh.

And in October 2011, at least 40 people died when a bus plunged into an eastern Nepalese river,
Kathmandu-based police spokesman Binod Singh said. Overcrowding may have caused that accident, the spokesman added.