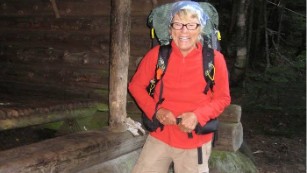 Two years ago, the whereabouts of
Geraldine “Gerry” Largay confounded authorities in Maine.

Largay, a 66-year-old experienced hiker from Brentwood, Tennessee, disappeared while trekking the Appalachian Trail in July 2013.
Hundreds of people searched for her. There wasn’t a single clue.

On Wednesday, a single person, a surveyor, came across bones, clothing and gear just over a half
mile from the trail.

The Maine Warden Service “feels confident” the remains found near Redington Township are those
of Largay, officials said on Friday.

A medical examiner will make that determination and how she died. Authorities said they don’t think
Largay was killed.

It’s a happy-sad day,” Lt. Kevin Adam of the warden service said, according to WABI. “We’re glad that we found her, but it’s also a sad day for the family to come to realization that a loved one is deceased.”

The family wasn’t going to comment on Friday, authorities said.

One mystery apparently has given way to another. Now the question is how did Largay end up so far off the trail? On land owned by the U.S. Navy.

Largay, whose trail name was “Inchworm,” started her journey in April 2013 at Harpers Ferry, West
Virginia.
She was last seen on July 22 where she talked with two women at a lean-to, a sheltered stopping point.

She planned to hike eight miles north that day and then continue the next day to a point where the trail crossed a road. Her husband was to meet her there, but she never showed.

According to the Boston Globe, Largay left the trail near a Navy survival school. The search for her
was made more difficult because the skies had poured on July 23.

She should have known she was on prohibited land, Adam said. It was marked.
“I don’t know how she got there. I don’t know why she’s there,” he said, according to the WABI report..
“Hopefully, with some of the stuff we’ve found, her belongings, maybe that will give us some indication once we look at that.”