Facing an investigation by Swiss authorities over allegations that he signed an “unfavorable” contract and made a “disloyal payment” to UEFA president Michel Platini, Blatter has been slammed with a 90-day suspension.

“They have not taken any decisions against him. But they have decided to wait on major decisions to
carry out further investigation,” Blatter’s advisor Klaus Stoehlker said.

Stoehlker added that Blatter still considered himself the president of FIFA and is “still prepared to serve
FIFA.”

Any suspension would have to be rubber stamped by the adjudicatory arm of FIFA’s Ethics Committee, which would rule on the request of the investigatory
chamber.

The Swiss authorities are looking into allegations believed to center on a 2005 TV rights deal between
FIFA and Jack Warner, the former president of CONCACAF, the governing body of football in North
and Central America and the Caribbean as well as the “disloyal payment” to Platini.

Blatter was informed of the suspension by the head of
FIFA’s Adjudicatory Chamber Hans-Joachim Eckhardt.

Stoehlker said Blatter would be back in his FIFA office on Thursday, insisting that the Swiss hadn’t
served his last day as the organization’s president.

Pressure group NewFIFANow, which has campaigned against Blatter, reiterated its call for
radical reform of the world governing body.

“With criminal investigations reaching the highest levels of FIFA, and potential ethics investigations
into other Presidential candidates, it once again reinforces the need for a complete ‘new broom’ at
FIFA to implement independent reform and essentially to start again,” said a NewFIFANow
statement.

Blatter’s suspension puts Issa Hayatou, vice president of FIFA, would potentially in line to take
charge of the organization.

Issa Hayatou however has his own history of sanctions.
In 2011, the 69-year-old was sanctioned by the International Olympic Commitee over taking cash payments from a sports marketing firm.

Hayatou, who has been in charge of African football since 1998, failed in his bid to become FIFA
president when he lost to Blatter in 2002.

Blatter’s travails are far from over as he might also be slammed with $100million lawsuit for refusal to reveal his wages and expenses. 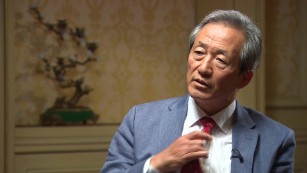 The billionaire businessman labeled Blatter a “hypocrite” and a “liar” while addressing the Leaders in Sport Business Summit in London on Wednesday.

The proposed lawsuit centers on Blatter’s refusal to reveal his wages and expenses during a FIFA
Executive Committee meeting in 2002.

According to the legal advice Chung says he has received, he says he could sue Blatter for $100
million in “damages and compensation proportionate to the damage he inflicted on FIFA.”

“Back in 2002, during an ExCo meeting I asked President Blatter his salary and expenses but he
refused,” Chung told reporters.

“Naturally for President Blatter to get paid without ExCo approval is embezzlement. That is why I plan
to sue Mr. Blatter on his embezzlement in court,” he said.

“In this day when you can find out the salary of a company president or a prime minister any time,
we still don’t know what Mr Blatter’s salary is.”

Chung added: “Everyone is calling for Mr. Blatter’s resignation because they know that he is the
source of the problems. Whenever I speak to football leaders, most of them agree Mr. Blatter is corrupt — but they will never speak out.”

Neither Blatter nor his lawyer has so far responded to Chung’s allegations or released any comments regarding the allegations.