An American Airlines pilot died midway on a flight between Phoenix and Boston on Monday.

Captain Michael Johnston, 57, was piloting the plane when he fell ill somewhere en route. The co-pilot
landed the jet safely.

Crew members “took extraordinary care of Mike, each other and our customers,” airline CEO Doug
Parker said in a statement sent to employees.

“We couldn’t be more proud of the teamwork this crew showed during an extremely difficult time.”

An autopsy and preliminary toxicology tests “showed that the death was the result of natural
diseases,” the Onondaga County, New York, medical examiner’s office said — without offering
specifics.

Johnston’s wife, BJ, told KUTV-TV that her husband had a double bypass surgery in 2006.
She said she was told he likely died of a heart attack.

“Whatever happened in the cockpit, none of us will know,” passenger Frank Cacciola told WCVB-TV.

Cacciola was among the 147 passengers and five crew members aboard Flight 550 when it took off
around midnight. Their Airbus A320 plane was being operated by U.S. Airways, which is part of
American.

After the pilot fell ill, the flight was diverted to Syracuse, New York.

“Medical emergency, captain is incapacitated,” someone in the cockpit told an air traffic controller,
according to audio posted to LiveATC.net . “Request handling for runway.”

Those on board knew something was wrong when a woman’s “quivering” voice came over the intercom, alerting them that the pilot was sick, passenger Peter McSwiggin told WCVB. 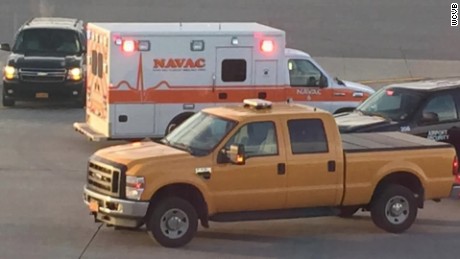 According to passenger Julia House, passengers waited for the body to be removed. They made it to Boston nearly five hours after their scheduled landing time.

Passengers expressed sadness about what happened and gratitude they arrived safely.

“If it wasn’t for the copilot using a cool head,” McSwiggin said, “it might have been more disastrous.”