Nigeria is a country located in West Africa. It is bordered by Benin, Chad Cameroon and Niger; its coast lie in the Atlantic Ocean. Its flag consists of two colours: Green and White. The Green signifies agriculture while the White signifies peace.

Nigeria comprises of over 500 tribes, of which Hausa, Yoruba and Igbo are the majority. Its population is slated at approximately 174 million people, which makes it the most populous country in Africa and the seventh most populous country in the world. It comprises of three major religion which are: Christianity, Islam and Traditional African Religion.

Nigeria is the world’s 20th largest
economy, worth more than $500 billion and $1 trillion in terms of nominal GDP and purchasing
power parity respectively. It is currently Africa’s largest economy. Its debt-to-GDP ratio is at
11 percent. It is considered to be an
emerging market by the World Bank and has been identified as a regional power on the African continent, a middle power in
international affairs, and has
also been identified as an emerging global power.

Nigeria gained independence from the United Kingdom as a Commonwealth Realm on 1 October 1960.
Nigeria’s government was a
coalition of conservative parties: the Nigerian People’s Congress (NPC), a party dominated by
Northerners and those of the Islamic faith, and the Igbo and Christian-dominated National
Council of Nigeria and the Cameroons (NCNC) led by Nnamdi Azikiwe.
Nnamdi Azikiwe became Nigeria’s maiden Governor-General in 1960. The opposition comprised the comparatively liberal Action Group (AG), which was largely dominated
by the Yoruba and led by Obafemi Awolowo.
The cultural and political differences between Nigeria’s dominant ethnic groups – the Hausa (‘Northerners’), Igbo (‘Easterners’) and Yoruba
(‘Westerners’) – were sharp.
An imbalance was created in the polity by the result of the 1961 plebiscite.
Southern Cameroon
opted to join the Republic of Cameroon while Northern Cameroons chose to remain in Nigeria.
The northern part of the country was now far larger than the southern part.
In 1963, the nation established a Federal Republic, with Azikiwe as
its first president .
When elections were held in
1965, the Nigerian National Democratic Party came to power in Nigeria’s Western Region.

In 1966, January precisely, the military overthrew the central and regional governments, citing its reason on corruption of government officials.
General Aguiyi-Ironsi was declared head of state and appointed Lt. Colonel Yakubu Gowon as his army Chief of Staff.
However, in July of the same year, a coup d’etat was carried out, which resulted in the murder of Gen. Aguiyi-Ironsi and the declaration of his army Chief of Staff, Lt. Col.Yakubu Gowon as the new head of state.
The counter-coup of 1966 , was supported primarily by Northern military officers, and it facilitated
the rise of Lt. Colonel Yakubu Gowon to head of state.
Tension rose between North and South; Igbos in Northern cities suffered persecution and many fled to the Eastern Region.
In May 1967, the Eastern Region declared independence as a state called the Republic of Biafra, under the leadership of Lt. Colonel Emeka
Ojukwu .
The Civil War began as the
official Nigerian government side (predominated by soldiers from the North and West) attacked Biafra (Southeastern) on 6 July 1967 at Garkem.
The 30 month war, with a long siege of Biafra and its isolation from trade and supplies, ended
in January 1970.
Estimates of the number of
dead in the former Eastern Region are between 1 and 3 million people, from warfare, disease, and
starvation, during the 30-month civil war.
France, Egypt, the Soviet Union, Britain, Israel, and others were deeply involved in the civil war
behind the scenes. Britain and the Soviet Union were the main military backers of the Nigerian
government while France and others aided the Biafrans.
In July 1975, Gen. Yakubu Gowon was deposed from being head of state, while he was at a meeting abroad, in a bloodless coup which declared Murtala Mohammed as head of state and Olusegun Obasanjo was appointed army Chief of Staff.
A coup which occurred in 1976 resulted in the assassination of Murtala Mohammed and Olusegun Obasanjo became head of state.
On 1st October 1979 (19th anniversary of Nigeria’s Independence), Gen. Olusegun Obasanjo handed over power to a democratic government.
Shehu Shagari became the civilian president of the Second Republic. However, the civilian government was ousted by a military takeover which cited its reason on corruption and incompetence by virtually all sectors of Nigerian
society.
The takeover resulted in Muhammadu Buhari as head of state. The military coup of Muhammadu Buhari
shortly after the previous regime’s fraudulent re-election in 1984 was generally viewed as a positive
development. Buhari promised major reforms, but his government fared little better than its predecessor. The regime was
overthrown by another military coup in 1985.
Ibrahim Babangida, declared himself president and commander in chief of the armed forces and the ruling Supreme Military Council. He set 1990 as the official deadline for a return to democratic governance.
After Babangida survived an abortive coup, he pushed back the promised return to democracy
to 1992.
Free and fair elections were finally held on 12 June 1993, with a presidential victory for Moshood Kashimawo Olawale Abiola.
Gen.Babangida annulled the elections, leading to mass civilian violent protests which effectively shut down the country for weeks. He finally kept his promise to relinquish office to a civilian-run government, but not before appointing Ernest Shonekan as head of the interim government.
Shonekan‘s caretaker regime was overwhelmed in late 1993 by the military coup of General Sani
Abacha .
Abacha used violence on a wide scale to suppress the continuing civilian unrest. The regime came to an end in 1998 when the dictator was found dead amid questionable circumstances.
His successor, General Abdulsalami Abubakar, adopted a new constitution on 5 May 1999, which provided for multiparty elections.
On 29 May 1999 Abubakar transferred power to the winner
of the elections, Obasanjo, who had since retired from the military.

After ruling for two terms (eight years), he vacated the presidential seat and was replaced by Umaru Musa Yar’adua. 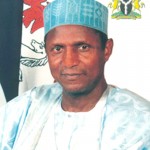 Yar’adua however died in office, on 5th May 2010, and was replaced by his vice, Goodluck Jonathan.

Goodluck Jonathan ruled from 5th May 2010 till 29 May 2015, when he handed over to Muhammadu Buhari, to rule the nation once more, on a civilian platform.

Nigerian citizens have authored many influential works of literature in the English language. Its best-known writers are Wole Soyinka, the first African Nobel Laureate in
Literature, and Chinua Achebe , best known for the novel, Things Fall Apart and his controversial critique of Joseph Conrad . 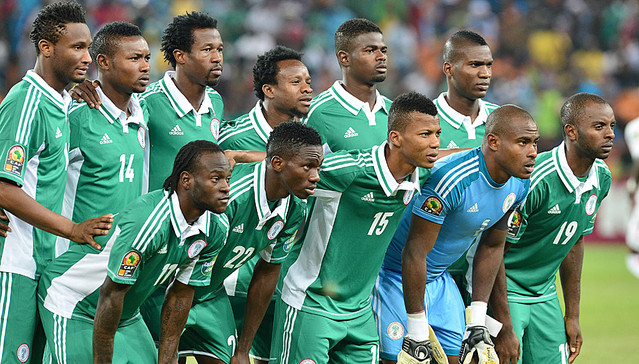 Football is largely considered the Nigeria’s national sport and the country has its own Premier League of football. Nigeria’s national football team , known as the “Super Eagles”, has made the World Cup on five occasions 1994,
1998 , 2002 , 2010, and most recently in 2014 .
In April 1994, the Super Eagles ranked 5th in the FIFA World Rankings , the highest ranking
achieved by an African football team. They won the African Cup of Nations in 1980 , 1994, and
2013 , and have also hosted the U-17 & U-20 World Cup. They won the gold medal for football in the 1996 Summer Olympics (in which they.beat Argentina) becoming the first African football team to win gold in Olympic Football.
The nation’s cadet team from Japan ’93 produced some international players notably
Nwankwo Kanu, a two-time African Footballer of the year who won the European Champions
League with Ajax Amsterdam and later played with Inter Milan , Arsenal, West Bromwich Albion
and Portsmouth . Other players that graduated from the junior teams are Nduka Ugbade,
Jonathan Akpoborie , Victor Ikpeba, Celestine Babayaro, Wilson Oruma and Taye Taiwo. Some other famous Nigerian footballers include John Obi Mikel , Obafemi Martins, Vincent Enyeama ,
Yakubu Aiyegbeni , Rashidi Yekini , Peter.Odemwingie and Jay-Jay Okocha.
According to the official May 2010 FIFA World Rankings , Nigeria was the second top-ranked football nation in Africa and the 21st highest in the world.
Nigeria is also involved in other sports such as basketball, cricket and track and field. Boxing is also an important sport in Nigeria; Dick Tiger and Samuel Peter are both
former World Champions.
Nigeria’s national basketball team made the headlines internationally when it qualified for the 2012 Summer Olympics as it beat heavily favoured world elite teams such as Greece and
Lithuania .
Nigeria has been home to numerous internationally recognised basketball.players in the world’s top leagues in America,
Europe and Asia. These players include.Basketball Hall of Famer Hakeem Olajuwon , and later NBA draft picks Solomon Alabi , Yinka Dare, Obinna Ekezie , Festus Ezeli and Olumide Oyedeji .

Since 2002, the North East of the country has seen sectarian violence by Boko Haram, an
Islamist movement that seeks to abolish the secular system of government and establish
Sharia law.
In May 2014, Boko Haram attacks have left at least 12,000 people dead and 8,000 people crippled.
At the same time, neighboring countries, Benin , Chad, Cameroon
and Niger joined Nigeria in a united effort to combat Boko Haram in the aftermath of a world media highlighted kidnapping of 276 schoolgirls and the spread of Boko Haram attacks to these countries.

Upon the inauguration of the recent Service Defence Chiefs, an ultimatum was given to conquer the terrorism sect within three months and this has led to reasonable progress in the expulsion of the sect.

Nigeria shall continue to wax strong as it gets older.
Happy Independence/New Month to all Nigerians nationwide and in diaspora.
God bless the Federal Republic of Nigeria!

One thought on “Nigeria at 55: The Journey So Far”