An accident involving a tour bus and a duck boat tourist vehicle occurred on Thursday morning in
Seattle, officials said.

At least four international college
students were killed in the accident, which was a collision of the two vehicles.

The students attended North Seattle College, which said several students are in critical condition, while other students and a North employee had serious injuries.

“Because the deceased were international students, government officials are working to contact next of kin,” the school said. “We extend our deepest condolences to the families of these deceased
students, as well as to the students and employee who sustained injuries.”

Four others were still at Harborview and were listed in satisfactory condition. Thirty-one patients were transferred to other hospitals, and two had been
released.

Some people were treated at the site of the crash, which involved four vehicles, on State Route 99,
officials said.

The duck boat tour operator issued a statement after the crash.

“Ride the Ducks of Seattle wishes to express its sincerest condolences to the family and friends of the people who were killed and those that were
injured,” it said.

The operator said it has voluntarily pulled all its vehicles from city streets for now, according to
Mayor Ed Murray.

Ride the Ducks of Seattle said the duck boat and a bus from Bellair Charters were involved in the
accident. 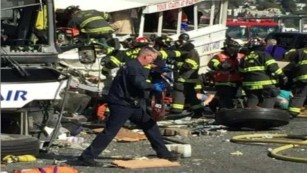 Seattle Police Detective Patrick Michaud said that all the people who died were bus passengers.

A nurse who was walking along the bridge when the crash occurred said there was a lot of blood, and
she saw one body on the road. She called the scene “traumatic” with a lot of blood.