A powerful 8.3-magnitude earthquake struck Chile, generating a nearly 16-foot wave, prompting the evacuation of about 1 million people and triggering tsunami advisories as far away as
California.

The quake hit Wednesday night with its epicenter 46 kilometers (29 miles) west of Illapel, according
to the U.S. Geological Survey .
Some of the fatalities occurred in Illapel, where homes sustained a lot of damage.

“The first thing we want to say is that we regret the deaths of five Chilean citizens,” Undersecretary of the Interior Mahmud Aleuy said.

He said the government sends its condolences to their relatives.

Large tsunami waves washed along the Chilean coast near the quake’s epicenter. In Coquimbo, a
15.6-foot wave became the largest to land on the shores of Chile, according to the U.S. National
Tsunami Warning center. 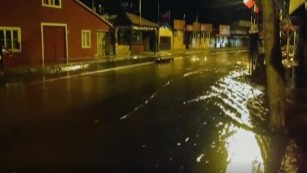 Tsunami advisories were issued thousands of miles away, including in Hawaii and California.

A tsunami advisory was issued for the coastal areas of Southern California, which means strong
currents are likely and residents should stay away from the shore.

Los Angeles, Orange and San Diego counties warned residents to stay away from beaches and harbors due to the chances of strong currents. But authorities in the three counties said land inundation is not expected.

“Widespread hazardous tsunami waves are possible” along the coast of Chile and Peru, the Pacific Tsunami Warning Center said, and a tsunami watch is in effect for Hawaii.

A tsunami watch is issued “to alert emergency management officials and the public of an event which may later impact the watch area,” the center says. A warning is issued when a “potential tsunami with significant widespread inundation is imminent or expected.”

Even New Zealand, which is 6,000 miles away from the quake’s epicenter, issued a tsunami warning.

In La Serena, a coastal city just north of Coquimbo, pictures taken at a shopping mall showed walls
and signs toppled to the floor, ceiling tiles caved in as well as chairs, benches and tables covered in rubble.

Coquimbo Mayor Cristian Galleguillos said that Chile that 95% of the city had lost electrical power.
Residents were evacuated before waves started hitting the coastline, he said.

More than a dozen aftershocks of magnitude 4.9 or higher rattled residents. Some could be felt in the
country’s capital, about 230 kilometers (145 miles) away from the quake’s epicenter .

“Everybody ran outside. The windows rattled.
Things fell. … The impact was strong,” said Emily Hersh, who lives in Santiago. “Even after I stepped outside, I felt the ground moving.”

The earthquake hit during rush hour, causing traffic snarls that left many people stuck in the streets as
they tried to get home, said Fabrizio Guzman, emergency communications manager for World Vision in Chile.

“There were many people afraid, running in the streets, when the shaking started,” he said in a
statement. “The earthquake felt really intense and seemed to last for several minutes.”

Chile is in one of the most earthquake-prone regions in the world.

The country sits on an arc of volcanoes and fault lines circling the Pacific Ocean known as the “Ring of Fire.” The area experiences frequent earthquakes and volcanic eruptions.

Since 1973, Chile has had more than a dozen quakes of magnitude-7.0 and above.