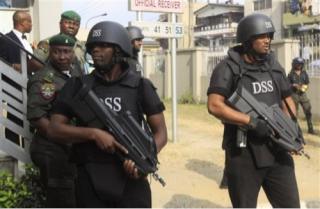 There was pandemonium on Tuesday at Ikorodu area of Lagos State, when officials of the Department of State Security Service, DSS, were attacked by
armed oil vandals, killing two at the spot.

Reports also indicated that bodies of the slain officials were also taken away by the vandals who ambushed the DSS operatives around Owutu area of Ikorodu.

The DSS operatives were
in Ikorodu to pay a last respect to their late colleague who was, before his death, residing within the area. However, the vandals who thought that the security operatives had come to arrest
them suddenly opened fire on them.

This is coming as two suspected vandals who were said to have been the mastermind of the
September 1, 2015 killing of four policemen attached to Owutu Police Division and Special
Anti-Robbery Squad, SARS, at Ishawo are currently cooling their heels in the security net at
Ikorodu.

The suspects who fled Ishawo after the incident were trailed to a hideout in Warri, Delta State where
they were apprehended.

It was further gathered that the suspects who are currently being interrogated by operatives of the
Special Anti-Robbery Squad at the State Command Headquarters, Ikeja, are helping the police to
apprehend the other suspects and recover the corpses of the missing policemen.
When contacted the spokesman at the Lagos State
Police Command, Ojo Offor,said that the Command is aware of the incident but that he had not been properly briefed on the issue.