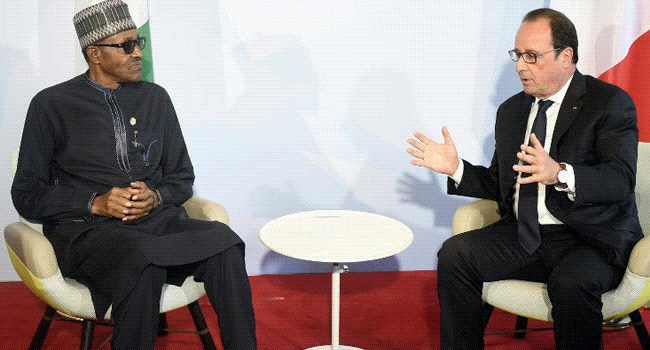 Nigeria’s determination to rout out
insurgency has got boosted by a commitment by French government to support the Multinational Joint Task Force (MJTF) with intelligence gathering
and high tech military equipment.

The commitment announced on Monday by the French President, Mr. François Hollande after a
closed door bilateral meeting with President Muhammadu Buhari at Elsee Palace in Paris.

It will be recalled that president Buhari left Abuja for Paris on a three-day official visit to France.

Addressing a joint press conference, the French President shared the concern of his government on the increasing spate of terrorism and insecurity in
Nigerian and other lake Chad countries.

According to him, the meeting with president Buhari was essentially resolved around some new strategies to foster partnership and cooperation to enable Nigeria and its neighboring countries of
Cameroun, Chad, Niger and Benin Republic completely stamp put terrorism through the joint action of the MJTF.

President Hollande also recalled that his country had last year hosted a Regional Summit on Security in Paris to galvanize thoughts on how to end terrorism.

“We provide all of the support to the countries in the region which are affected by this cult and in Nigeria,
we want to provide support and solidarity,” he stated.

He commended President Buhari for initiating the relocation Nigeria’s highest military command to Maiduguri, the hotbed of the Boko Haram, saying it has so far produced tangible results.

Speaking further, President Hollande disclosed that France has concluded arrangements to invest a total of €130million in the development of infrastructure in Nigeria for rebuilding of roads,
provision of electricity and water supply, even as he hailed the economy of Nigeria under President Buhari despite the dwindling oil prices.

“The Nigerian economy remains strong so, France wants to be doing business in the country.”

While pledging to cooperate, President Buhari told his host that Nigeria would be depending on France and other G7 countries to help her tackle the menace of piracy and oil theft in the Gulf of Guinea.

“We have to depend on France and the other G7 countries for support to fight piracy.

“Our next shopping list is going to G7 in terms of intelligence and training. Another problem is the
problem in the Gulf of Guinea, from Senegal to Angola, that area is endowed with resources like
petroleum and other minerals but surrounded by piracy and theft.

“We are going to depend on France and G7 countries to flush these criminals out of the region.”

President Buhari also who stated that unemployment has been a source of worry for the government at home informed his host that his was working hard to revitalize the agricultural sector.

“We want to make sure we feed ourself and provide security before other things are also tackled.

“That is why we focus on agriculture and mining before other infrastructure including electricity are tackled”, he said.

Apart from discussing the issue of climate change of which Nigeria is an interested party, the two leaders also deliberated on a Memorandum of Understanding to build a €30M project solar power
plant in one of the local governments of Osun State.
The capacity of the solar power plant is gathered to generate 10 to 14 megawatts.

The leaders also discussed the issues of establishing a joint committee to increase trade and
investment.

It will recalled also that Nigeria and France last year signed bilateral agreements which enables the French government to provide 1.170 Million dollars soft loan through the french development agency AFD for the construction of high voltage power lines and substations that will connect Abuja with electrical distribution network.

Meanwhile, talks between both countries were expected to continue today.