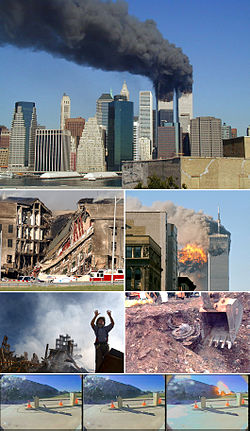 It was a sunny morning, the day was a Tuesday, the date was September 11 and the year was 2001.

As is the norm with every child’s daily routine, I woke up, brushed my teeth, took my bath, had breakfast and off I went to school.

It seemed like a very good day due to the clear weather but unknown to the world, an earth-shaking event was about to occur. I went through the day like every other day, having my lectures, playing during recess, e.t.c.
After school, I returned home, had my afternoon bath, ate lunch and took my siesta.

Waking up, there was power supply so I hurriedly made my way to the living room to watch TV. Turning on the TV, I was about to navigate to the cartoon network when I was stopped by what I thought was the trailer of a blockbuster movie. Planes flew into buildings, there was an explosion, people fled the scenes and there were screams.
I went on to navigate to Cartoon Network.

Later in the night, my dad switched to CNN and on the screen was a recap of the same scene I saw earlier on. Intrigued, I asked my dad why humans would drive planes into buildings all for the sake of movie acting. He then answered my question by giving me a detailed explanation of what I had seen on the screen and it hasn’t left my mind for even a single day.

On the morning of that fateful September 11, several innocent American citizens boarded four California-bound airplanes, without knowing that it was going to be their last day on this cruel planet called Earth, which never got to the borders of California.

At 8:45am, while I was probably taking my first lecture of the day, the first plane (an American Airlines Boeing 767) was crashed into the north tower of the World Trade Center in New York City.
Exactly eighteen minutes after, at 9:03am, the second plane (a United Airlines Boeing 767) was crashed into the south tower of the same World Trade Center building.
This two crashes resulted in the collapse of the two towers and several other parts of the building, which caused lots of casualties.

At 9:45am, forty two minutes after the second crash, a third plane (an American Airlines Boeing 757) laden with thousands of gallons of jet fuel, was slammed into the west side of the Pentagon military headquarters in Washington D.C.
Meanwhile, on the fourth hijacked plane, several patriotic citizens fought the hijackers and this resulted in the crash of the plane on a rural farm in western Pennsylvania at 10:10am. Only the supernatural knew the eastern side of which notable building (from all indications, the terrorists were trying to make a hit at all cardinal points) the hijackers had in mind to plunge the plane into.

In total, about three thousand lives were lost on what turned quickly from a sunny day into a black Tuesday.
The motive of these attacks was so stupid that if it were during the era of Caesars or Pharaohs, the masterminds would have been subjected to the worst death penalty ever imagined in human existence. These attacks were all the result of megalomaniacs who decided to use religion as a base to perpetrate terrorism. A war on antiterrorism was launched on full scale and ten years later, precisely on May 2, 2011, a mastermind of these 9/11 mass murder, Osama bin Laden was killed in Afghanistan.

However, there is one question the world need to ask:
14 years after the 9/11 incident, what is the take on terrorism?

Terrorism has kept evolving in different parts of the world, under different names.
In Africa, there’s Al-Shabaab, Boko Haram, e.t.c
In the East, there’s Al-Qaeda and several other terrorist groups.
Of recent, the terrorist group ISIS, also known as ISIL, has held the world down by its barbaric activities, publicized executions, and lots more.
To worsen matters, they took a cue from the evil masterminds of the 9/11 massmurder and laid their basis on religion.

No religion or religious book promotes violence, mass murder, genocide, e.t.c. We should all try to stop misinterpreting the holy books by fighting against each other. We are all one, regardless of our difference in race, religion, tribe, language. Shun violence, hate and other vices. Let us all join hands and say no to terrorism.

Rest In Peace  to

and to all others who lost their lives on that black Tuesday.