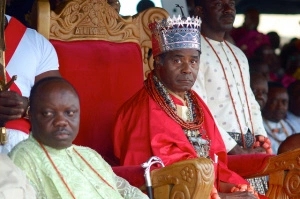 The Olu of Warri, Godwin Edomi, Ogiame Atuwatse II is dead.
He was said to have died in Lagos on Friday night of an undisclosed ailment.

Atuwatse became the Warri monarch in 1987.

There have been several reports that the monarch might have died from a brain injury he suffered after reportedly falling from the stairs of his Warri residence in Delta State.

It was also reported that Atuwatse was due to have a surgery at Reddington Hospital in Victoria Island, Lagos, where he was rushed to, before he passed on.

It further said the monarch’s body had been flown back to Warri for burial.

In 2013, the Olu of Warri was embroiled in a controversy when he allegedly planned to relinquish
the traditional title of Ogiame but that decision did not go down well with the Itsekiri people.

After four days of protest by the people over his decision to renounce the title he bowed to the
wishes of his subjects.

The monarch, who claimed the title Ogiame was associated with the ‘Sea goddess,’ had said he had
nothing to do with the deity.

Twenty-two palace chiefs at the height of the protest criticised the decision of the monarch to
renounce the Ogiame title.

According to the tradition of the Itsekiri, the transition would not be officially announced until after three months when a new king will be ready to be installed.