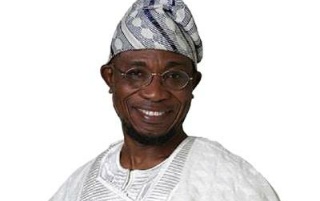 Osun state governor,Mr. Rauf Aregbesola has described Justice Folahanmi Oloyede who petitioned
the state house of assembly to investigate him and his deputy, Mrs Titilayo Laoye-Tomori for alleged mismanagement of the state resources as a blatant liar and incompetent judge.

The seven-man investigative panel set up by the house to investigate the petiton have since dismissed it for lacking in merit and also
recommended the judge to the State Judicial Council, SJC, and the National Judicial Commission,
NJC, for serious sanction for alleged betrayer of oath of her office.

But a human rights activist in the state and Chairman, Civil Societies Coalition for the Emancipation of Osun State CSCEO, Comrade
Adeniyi Alimi Sulaiman has urged the women activists in Nigeria to rise up in defence of Justice
Oloyede, whom he described as a courageousBwoman judge.

He dropped the names of the leading Women’s rights activists such as Mrs Joe Okei Odumakin of
Campaign for Democracy,CD and Women Arise, Abiola Akinyode-Afolabi of Women Advocates
Research & Documentation WARDC, Dr Mrs Oby Ezekwezile of Bring Back our Girls group, among
other women activists in the country, to rise against the alleged plan to unjustly victimized of one of their own in the bench, by the power that be in the land.

Aregbesola had at the 50th birthday party organisedbby the speaker of the state Assembly, Hon. Najeem Salaam, took a swipe at the Judge saying she has lost her integrity in the judiciary.

His words: “It is time for me to speak on the petition written by one of the judges in the state. I want to say that there was no basis in the petition. Its all lies. A judge that doesn’t know herself as judge. You can only see a judge and not heard. She (Oloyede) doesn’t have any substance in the judiciary. She
lied against me.”

“The journalists should have checked the financial statement of the allocation before writing their
stories. Most of them (journalists) want me out of office but I will triumph over them. If had collected
538bn, Osun would have turned to Dubai. I am happy Buhari went to USA and it was said that one million barrel crude oil was being stolen everyday.

“Is there any country that would lose 1 million barrel every day that would not suffer economic hardship?
God will open economic doors to Osun soon. I was accused of not being in the state, I was perturbed
by this report but the weekly executive meeting register proved them wrong.”

“I have never gone on leave since November 2010 I came into governance. There is no single truth in judge’s petition. I will tell the side of my story bit by bit. I am confident that  before the end of the month the period of hard time will smoke off in the state”, the governor added.